Doing work that makes a difference

Home/Lunches/Doing work that makes a difference

Doing work that makes a difference

Finding a rental property can be tough. But imagine you’re a single mum who’s been in an abusive relationship and doesn’t have a job – how much harder would it be?

Louise Gardiner, the 103rd person I’ve met on my quest to have lunch with 500 strangers, is trying to solve this problem in her role with Domestic Violence NSW.

The state government provides rental support for survivors – but that money is useless if landlords won’t accept them as tenants. So Louise is working on a program that aims to tackle the problem by partnering with real estate agencies. 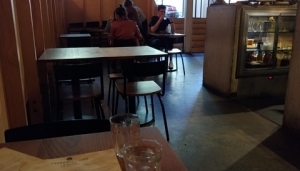 In part, the program presents property managers with survivors who would be a reasonable fit for the vacancies they’re trying to fill. It also educates property managers about the realities of taking in a survivor, so they in turn can educate their landlord clients.

For example, the landlord gets guaranteed rent, because it’s paid by the government rather than the tenant.

Louise joined the not-for-profit sector in 2019, after two decades in the corporate world. Despite the significant pay cut, Louise says she’s never had a more satisfying job, because she gets to do work that makes a difference.