Life can have some surprising plot twists

Home/Lunches/Life can have some surprising plot twists

Life can have some surprising plot twists

It’s not every day you get to have lunch with someone who’s published 20 books.

Gunnar Habitz, the 50th person I’ve met on my quest to have lunch with 500 strangers, is a prolific author, with a string of business books and travel guides to his name.

Gunnar’s next book, Chance For Change, which he hopes to complete this year, will tell the story of why he moved from Switzerland to Sydney. 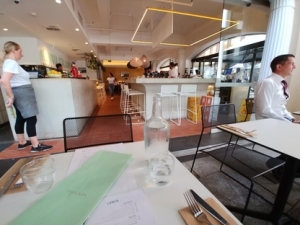 In late 2015, Gunnar received some surprising news: his company had decided to make his management position redundant after many years. He and his wife chose to see it as a positive, because it gave them the chance to take a three-month trip to New Zealand and Australia – and wonder what it would be like to begin a new life in a new home. During the trip, Gunnar applied for jobs in both countries. Eventually, in late 2016 – after returning to Zurich – he found work in the software industry in Sydney.

So the shock of redundancy ultimately gave him the chance to make an exciting change.

When he’s not writing, Gunnar works in technology, teaches social selling to small businesses and serves as a mentor at the Institute of Managers and Leaders.