The great thing about my quest to have lunch with 500 strangers is that I get to hang out with people like Rob Shehadie & Joseph Ishak.

Rob and Joe, the 59th and 60th people I’ve met, are long-time friends who have followed very different paths in life.

Rob played rugby union for Australia at youth level before injury cut short his career. One day, while working at a construction site, he got a call from his brother – a friend, who was making a new TV show, needed a tall, strapping lad to film a guest spot, so perhaps Rob could fill in? 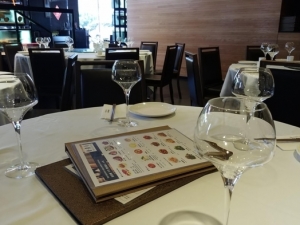 Rob did so well that he was soon made a regular cast member of this show, Pizza. Rob later appeared in Fat Pizza and Housos and co-created Here Come the Habibs. These days, Rob does a mix of acting, writing, stand-up comedy and MCing.

Joe was an outstanding rugby league player when he was young, but ultimately chose study over sport, and took a university scholarship to do actuarial studies. He’s since pursued a career in finance and sales, and now works as a management consultant.

Rob and Joe are great blokes with an endless supply of anecdotes and the endearing habit of finishing each other’s stories like an old married couple.