The world’s his oyster

The world’s his oyster

Darren Venter, the 62nd person I’ve met on my quest to have lunch with 500 strangers, has a fascinating past, an intriguing present and an exciting future.

Darren grew up in South Africa, and while a lot of his family have worked in real estate, he studied jewellery design. Being colour-blind forced him to learn cutting-edge CAD technology that could identify colours for him. In 2009, his knowledge of that tech – which was little-known in Australia – earned him a job in Sydney.

Darren now works as a designer for Paspaley, the famous pearling dynasty, which nurtures its pearls on the remote coast of north-west Australia. 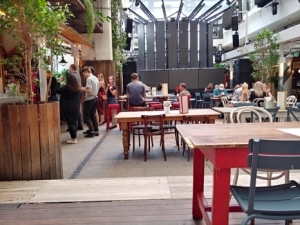 That isolation partly explains why Paspaley has the best pearls in the world, Darren says, because it means the oysters live in more pristine water. That region also has an enormously high variation in tides; as a result, the oysters receive more nutrients, which also leads to higher-quality pearls.

As for the future, Darren has finally followed his family into property. He’s got a growing business, Sydney Home Buyers, which helps investors find quality real estate assets, and which he’s planning to build into a successful buyer’s agency.